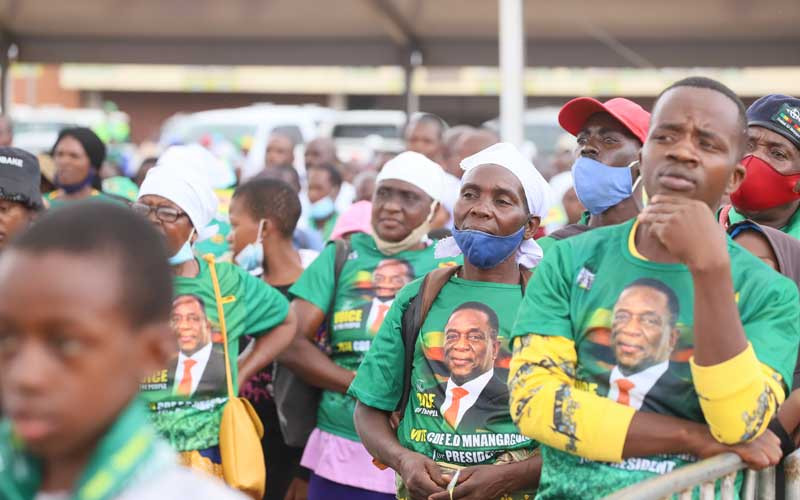 Mahofa was among other top party officials who took to the dance floor as they waited for Grace to show up at the party’s congress venue in Harare.

At the time, the late former President Robert Mugabe was carrying out a ruthless purge against perceived supporters of his deputy Joice Mujuru.

Scared to be associated with Mujuru, Zanu PF politicians including Mahofa went to extraordinary lengths to appease the Mugabe family, and support Grace’s rise to power.

Incidentally, Mnangagwa used a Zanu PF special congress in December 2017 to say he did not want bootlickers and praise singers who compose and sing songs under his name as they did the Mugabe’s.

Officially opening the congress that year, Mnangagwa urged party fanatics to sing the national anthem and all-embracing liberation war songs as he sought to present himself as different from Mugabe.

“The role you have given me and the office you have inserted me into can never be partitioned to anyone,” Mnangagwa said back then.

“My presidency is about a united Zanu PF, a national party with a national outlook.”

During his days, Mugabe would receive all manner of lurid praises from party loyalists such as Webster Shamu who once went overboard saying he wished that the long-ruling leader was his father.

“If I was given an option to choose my father before birth, where would I go? I would have been Chatunga’s elder brother,” Shamu gushed in 2012 while officiating at an event.

“I would have been number one at First House, at President Mugabe’s house. I would have said that’s where I want to be born.”

Four years on, the praise-singing script has not changed as all manner of shadowy groupings are being formed in Mnangagwa’s name to push for his 2023 re-election bid with critics saying this marks the creation of another demi-god.

Mnangagwa has already been endorsed as Zanu PF’s 2023 presidential candidate.

The pro-Mnangagwa shadowy groupings have caused irritation within Zanu PF circles with party members feeling side-lined by the president’s love for parallel structures.

These groupings include Varakashi, Young Women for ED, Men BelievED, Mahwindi for ED, Pastors for ED, Teachers for ED, Councillors for ED, Mapositori for ED, Bornfrees for ED and the latest and most curious one, born just yesterday, Journalists for ED (JED).

A fortnight ago, another grouping Health Ambassadors for ED was launched in the capital Harare, with its coordinator Kudakwashe Maswiswi not hiding their intention to campaign for Mnangagwa.

“We pledge our total support to His Excellency President of the Republic of Zimbabwe, Comrade Dr Emmerson Dambudzo Mnangagwa in pursuit of vision 2030,” Maswiswi said at the launch.

Political analysts said it was always a matter of time before Mnangagwa showed his true colours as a Mugabe re-incarnate, having served as his loyal disciple from the days of the liberation struggle.

University of Zimbabwe political science lecturer Eldred Masunungure said Mnangagwa was going the “Mugabe-way”, but without the latter’s charismatic attributes.

“Mugabe falls in the category of charismatic leaders that naturally attracted devotion and admiration among his followers,” Masunungure said.

“Mugabe exhibited a compelling and even exceptional charm that is difficult to match by virtue of the fact that charisma, especially in politics, is not transferable.

“In short, though the attempt at Mugabenisation is being made, such a reinvention of Mugabe is unlikely to succeed for the simple reason that charisma is not an inheritable attribute.”

Mugabe was widely known for his fiery speeches, a powerful orator and as an unrepentant example of black self-determination and Pan-African pride.

Political analyst Maxwell Saungweme said Mnangagwa was copying from Mugabe’s hymn-book, including his tricks that saw him rule the country for a total 37 years until his ouster in 2017.

“Mnangagwa and his top leadership got into power in 1980 without proper schooling and experience in governance. The only experience they had over the years is how they and Mugabe were doing things,” Saungweme said.

“So what Mnangagwa is doing is not expected to be different from Mugabe as he learnt and forgot nothing from Mugabe, his political godfather and mentor.

“In short Mnangagwa’s tenure is an annex of Mugabe’s epoch. So apart from the obvious Mugabe traits of poor leadership, expect longevity propensities as well.”

As discontent grew over his misrule and economic collapse, Mugabe turned to ex-combatants and the youth to drum up support.

In 2007, thousands of war veterans gathered in Harare in a “million-man march” in support of Mugabe’s re-election bid despite a severe economic crisis and Zanu PF internal contestation.

Mugabe went on to lose the presidential election to the late MDC leader Morgan Tsvangirai, paving the way for a run-off.

Mnangagwa was later named as one of Mugabe’s allies that later orchestrated untold political violence against the opposition ahead of the run-off election, forcing Tsvangirai to withdraw from the polls.

According to analyst Rejoice Ngwenya, it was naive to assume Mnangagwa would be radically different from Mugabe when it comes to power retention antics.

“Mnangagwa’s political DNA is Zanu PF through and through. He lived literally the whole of his political life under the Mugabe tutorial, so he knows nothing else,” Ngwenya said.

Mnangagwa once served as Mugabe’s personal assistant and bodyguard during the liberation struggle.

In 1977, he was appointed head of both the civil and military wings of Zanu and served in key ministries since independence.

“True, he promised to be different, but remember it is (Constantino) Chiwenga who thrust him into power. Thus he becomes a worse reincarnation because he is under more existential threat than Mugabe,” Ngwenya said.

Mnangagwa’s deputy, Chiwenga, was the Zimbabwe Defence Forces commander during the 2017 coup.

“His crude business ‘ethics’, lower education and insecurity are ingredients to a formula of authoritarianism far worse than Mugabe,” Ngwenya added.

“The worst is yet to come given the undertones of dissatisfaction in his own party. He designed Mugabe’s power retention template, shredded it so he has designed something worse to protect his fragile political brand.”

“He could have the resolve to stay in power for too long, even all his life like his idol almost did, but the constitution and its term limits will be his biggest hurdle,” Mlotshwa said.

“He will have to be very brave to turn back the achievement of the 2013 constitution and insist on staying on beyond 2028.

“He will need to take the whole country back to another referendum to change the constitutional provision for two terms. But one thing for sure, he is intent on staying on until 2028, no matter what the factional dynamics are within his party.”