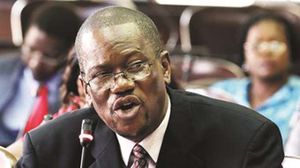 In a management meeting held on Tuesday, Moyo announced his departure from the ministry after serving for four years since his appointment in 2018.

TINASHE MAKICHI INTERNAL squabbles within the government have reportedly pushed out Mines and Mining Development permanent secretary Onesmo Mazai Moyo who announced his departure this week, the Zimbabwe Independent has established.

In a management meeting held on Tuesday, Moyo announced his departure from the ministry after serving for four years since his appointment in 2018.

Before he became a permanent secretary, Moyo served as the general manager of Minerals Marketing Corporation of Zimbabwe (MMCZ).

The Independent is reliably informed that there has been a well-orchestrated scheme within the Office of the President and the Cabinet (OPC) and at the Mines ministry to jettison the top official.

There are indications that Moyo had suggested serving until 2023 but the move was shot down leading to his impending departure.

“Moyo has been under pressure for some time now. Some officials within the ministry have been lobbying the OPC to have him removed,” a source close to the developments said.

“He eventually gave in to the pressure and this week he announced his departure. He had initially requested to hold the fort until 2023 but that was shot down.”

There are also indications that government bigwigs were not happy with Moyo because of the rising number of mining disputes that went unresolved.

During his tenure, the ministry was rocked by several cases of mining disputes and in various instances, officials working under him faced allegations of corruption.

Contacted for comment, Moyo referred all questions to his principals.

“I cannot comment on those issues and I suggest you contact the appointing authority and get a comment,” Moyo said without disclosing his exact date of departure.

The latest Auditor-General’s report for the year ended December 31, 2020 raised red flags that there could be over- or understatement of the amount disclosed as the Public Financial Assets for the Ministry of Mines and Mining Development where Moyo is the accounting officer.

According to the report that is done annually, the ministry failed to produce an accurate return on public financial assets.

The reconciliation of the funds that were used in line with the Hwange Colliery investment was reported to be still pending at the time of the audit.