Always buckle up, it could save your life 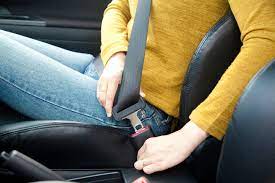 Nonetheless you can be ticketed for listening to the radio without a listener’s licence, cracked windscreen, just driving around with an ugly face or the cops most favourite one . . . obstructing the course of justice.

Andrew Muzamhindo I HAVE been involved in near fatal accidents twice.

On both occasions the seat belt came to my rescue.

When was the last time you were ticketed by our Zimbabwe Republic Police for not buckling up?

Nonetheless you can be ticketed for listening to the radio without a listener’s licence, cracked windscreen, just driving around with an ugly face or the cops most favourite one . . . obstructing the course of justice.

The last one will scupper all your travel plans and most likely, you will end up behind bars for the weekend.

While seatbelts do occasionally contribute to serious injury or death, nearly all safety experts agree that buckling up dramatically increases your chances of surviving an accident.

When you think about it, this is absolutely amazing: How can a piece of fabric end up being the difference between life and death?

What does it actually do?

In this article, I will look at the technology of seatbelts to see why they are one of the most important technologies in any car.

The basic idea of a seatbelt is very simple: It keeps you from flying through the windshield or hurdling toward the dashboard when your car comes to an abrupt stop.

This happens because of inertia. The law of inertia states that an object in motion continues in motion with the same speed and direction unless acted upon by an unbalanced force.

Inertia is an object’s tendency to keep moving until something else works against this motion.

To put it another way, inertia is every object’s resistance to changing its speed and direction of travel.

Things naturally want to keep going. If my “O level” physics teacher is reading this article he will be pleasantly surprised…I was paying attention in class after all.

Air resistance and friction with the road are constantly slowing it down, but the engine’s power compensates for this energy loss.

Anything that is in the car, including the driver and passengers, has its own inertia, which is separate from the car’s inertia.

The car accelerates riders to its speed. Imagine that you are coasting at a steady 100 km per hour.

Your speed and the car’s speed are pretty much equal, so you feel like you and the car are moving as a single unit.

Imagine if the car were to crash into a telephone pole, it would be obvious that your inertia and the car’s were absolutely independent.

The force of the pole would bring the car to an abrupt stop, but your speed would remain the same.

Just as the pole slowed the car down, the dashboard, windshield or the road would slow you down by exerting a tremendous amount of force.

It is a given that no matter what happens in a crash, something would have to exert force on you to slow you down. But depending on where and how the force is applied, you might be killed instantly or you might walk away from the damage unscathed.

If you hit the windshield with your head, the stopping power is concentrated on one of the most vulnerable parts of your body. It also stops you very quickly, since the glass is a hard surface.

This can easily kill or severely injure a person.

In severe crashes, when a car collides with an obstacle at extremely high speed, a seatbelt can inflict serious damage.

As a passenger’s inertial speed increases, it takes a greater force to bring the passenger to a stop.

In other words, the faster you are going on impact, the harder the seatbelt will push on you.

So now you know why you should not be speed star on our roads.

Some seatbelt systems use load limiters to minimise belt-inflicted injury.

The stitches holding the fold in place are designed to break when a certain amount of force is applied to the belt.

When the stitches come apart, the webbing unfolds, allowing the belt to extend a little bit more.

More advanced load limiters rely on a torsion bar in the retractor mechanism. A torsion bar is just a length of metal material that will twist when enough force is applied to it.

But when a great deal of force is applied to the webbing, the torsion bar will twist slightly.

This allows the webbing to extend a little bit further.

This should be enough physics for today.

Over the years, seatbelts have proven to be far and away the most important safety device in cars and trucks.

They are by no means infallible, however, and car safety engineers see a lot of room for improvement in today’s design.

In the future, cars will be outfitted with better belts, better air bags and, most likely, completely new safety technology.

Of course, our Zimbabwe Republic Police will still have to address the biggest problem with safety devices . . . getting drivers to use them.