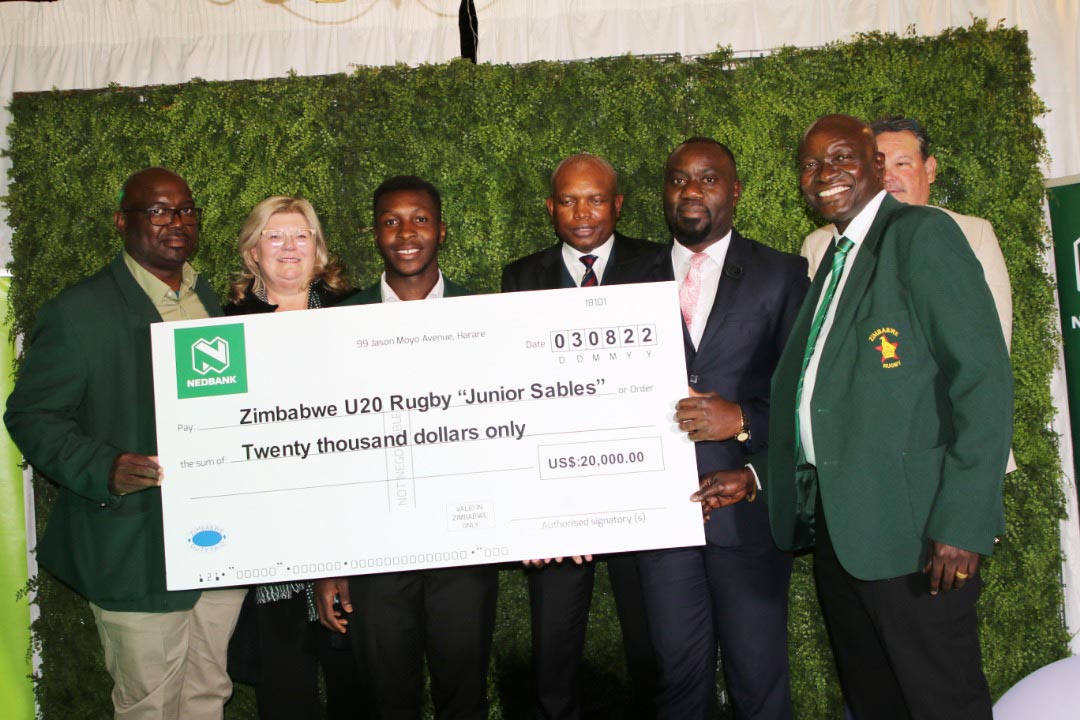 The commercial banking company is the headline sponsors of the country’s flagship rugby side the Sables, who missed out on qualification for the 2023 Rugby World Cup in qualifiers played in France last month.

DANIEL NHAKANISO NEDBANK Zimbabwe Limited has reaffirmed its commitment to support the development of rugby in the country after unveiling a US$20 000 sponsorship package for the Zimbabwe Under-20 rugby team ahead of their participation in the World Rugby U20 International Series in Canada.

The commercial banking company is the headline sponsors of the country’s flagship rugby side the Sables, who missed out on qualification for the 2023 Rugby World Cup in qualifiers played in France last month.

Nedbank also bankrolled the domestic Rugby Challenge Cup, which was won by Old Georgians in March.

Now they have gone a step further by investing in the future of Zimbabwean rugby by unveiling a sponsorship package for the Junior Sables.

Nedbank’s executive head of sales and origination Heresy Herry said their sponsorship of the Junior Sables takes their investment in Zimbabwe rugby to US$350 000 in a space of 12 months.

“The exploits by the Under 20s certainly cannot go unrecognised. We were watching when they were playing in the Barthes Cup in Kenya. We will not be only giving the team good wishes as they head to Canada but we are unveiling our modest support for the Under-20 rugby team which takes our contribution to Zimbabwe Rugby to US$350 000 in a space of one year,” he said during the unveiling ceremony on Wednesday evening.

Herry praised the Sables for being true ambassadors of their brand despite missing out on the ticket to next year’s Rugby World Cup.

He highlighted the positives which came from the qualifiers that include the move by local rugby players to French clubs on professional contracts after they impressed during the qualifiers.

“Your conduct has been worthy of admiration like what coach Brendan Dawson said they literally left everything on the pitch. And talk of admiration as Nedbank we always strive to be a bank that is admired by its shareholders and customers and the community,” Herry said.

“So, whenever we get the opportunity to partner with like-minded institutions, we always harness those opportunities. As money experts, we strive to do good.

“Last year when we unveiled the initial US$120 000 sponsorship there was only one thing we asked for, which was that rugby be spread and propagated to formerly marginalised communities.

“That is our only request from you and may that continue. I’m happy that you have reciprocated when looking at the four youngsters who have secured contracts in France. Those are the success stories that we aspire for and that is what we live for as an institution,” he added.

The support for the Zimbabwe Under-20 side comes as they prepare for the World Rugby U20 International Series which runs from August 9 to 24 in Ontario, Canada.

The high-profile tournament will give an opportunity for the participating teams to prepare for the World Rugby U20 Championship next year.

The Junior Sables, who are the reigning African champions after winning the Rugby Africa Under-20 Barthes Trophy in Kenya early this year, will be competing in the tourney which features the hosts Canada, Chile, and Uruguay.

“This is a partnership that has just begun and I think there is more to come. I know Nedbank said this is a small token but we really appreciate it,” he said.

“My journey as Junior Sables head coach started last year with the Zambian series and it’s difficult to get partnerships especially when we came from a sixth-place ranking.

“No one was really interested but we were fortunate to win the Rugby Africa Under-20 Barthes Trophy.

“Competing in the Canada Series will give us an opportunity to gauge ourselves against some of the top teams in the world and set a platform for the World Rugby Under-20 Trophy next year,” De Souza said.