Cara Black in race for tennis Hall of Fame 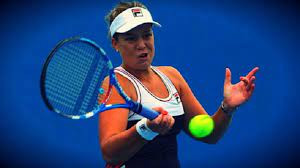 LEGENDARY former Zimbabwe female tennis star Cara Black is back among the nominees for the Class of 2023 International Tennis Hall of Fame ballot.

Black was one of the six nominees in the Class of 2022 voting which included Juan Carlos Ferrero of Spain, Ana Ivanović of Serbia, Carlos Moyá of Spain, Flavia Pennetta of Italy, and Lisa Raymond of the United States but yielded no new inductees.

The 43-year-old icon is a 10-time major title winner and a former world number one in doubles tennis. Cara has won five Grand Slam women's doubles titles in her career.

All of Black’s rivals are back in contention this year with the addition of Canadian former world one doubles player Daniel Nestor who is a 12-time Grand Slam winner in doubles and mixed doubles while he is the first player in ATP Tour history to win 1 000 doubles’ matches.

Last year, riding on the overwhelming support from home, Black won the Fan Vote relegating Flavia Pennetta and Ana Ivanovic into second and third place, respectively, but it did not guarantee her Hall of Fame induction.

She was supposed to receive an affirmative vote of 75% or higher from the combined results of the Official Voting Group and bonus percentage points earned in the Fan Vote and none of the nominees met the criteria.

There are two candidates in the Wheelchair Tennis Category, Esther Vergeer from Netherlands and American Rick Draney.

“The nine nominees to the Class of 2023 ballot for induction into the International Tennis Hall of Fame represent tennis’ greatest achievements across multiple disciplines of the sport,” chairperson of the ITHF Enshrinee Nominating Committee Katrina Adams said.

“As a former player, I appreciate the hard work and professionalism each of these world class athletes possess. Being recognised as a candidate for tennis’ highest honour, induction into the Hall of Fame is a momentous accolade,” she added.

The ITHF’s annual Fan Voting for the player category began yesterday and ends on October 30 with results set to be announced soon after.

Fans can cast their ballots at vote.tennisfame.com.

The top three candidates in the Fan Vote receive added points to their vote totals from the Official Voting Group comprising tennis journalists, historians and Hall of Famers.

A sibling to Zimbabwe tennis icons Byron and Wayne Black, Cara won Wimbledon doubles title three times while she also won the Australian and US Open between 2004 and 2008.