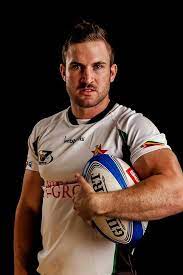 The Cheetahs, as the national rugby sevens side is affectionately known, are bracing for a busy international schedule next month where they will feature in the World Rugby Challenger Series event and the subsequent Rugby World Cup Sevens to be hosted by South Africa, a month later.

DANIEL NHAKANISO ZIMBABWE rugby sevens coach Graham Kaulback has named an experienced squad for the World Rugby Sevens Challenger Series, which will be played in Santiago, Chile from August 12-14 with one ticket on offer to gain promotion to the HSBC World Rugby Sevens Series 2023.

The Cheetahs, as the national rugby sevens side is affectionately known, are bracing for a busy international schedule next month where they will feature in the World Rugby Challenger Series event and the subsequent Rugby World Cup Sevens to be hosted by South Africa, a month later.

They will be making their return to international action for the first time since securing qualification for the Rugby World Cup Sevens by finishing as losing finalists in the Rugby Africa Cup Sevens in Uganda in April.

Ahead of the trip to South America, Kaulback has named a formidable squad which is led by experienced Harare Sports Club back liner Kudzai Mashawi.

Spain-based wing Shingirai Katsvere, who was part of the Sables squad which missed out on qualification for next year’s Rugby World Cup, will be one of the key players for the Cheetahs as they hunt for glory both in Chile and South Africa in the next few weeks.

Headlining the new faces in the squad is the exciting Botswana-based scrum half Pride Nyameni, who is finally set to make his Cheetahs debut in Chile.

The 23-year-old Mbare-born star, who plays for the Botswana club Spartans RFC, earned his call-up after putting on some brilliant individual performances during the Zambezi Sevens Challenge played at Harare Sports Club in Harare in April.

The Gaborone-based Spartans side, which knocked out the Cheetahs in the semi-finals of their home tournament, is made up of expatriate Zimbabwean players based in Botswana.

Former Zimbabwe youth international Tapiwa Mulenga is also set to make his international debut for the Cheetahs, while twin brothers Munesu and Munopa Maneta have earned their places back in the squad.

While the Cheetahs have their sights on Rugby World Cup Sevens slated for Cape Town in September, their immediate focus will be on the World Rugby Sevens Challenger Series with the winners achieving the highly coveted core status on the HSBC World Rugby Sevens Series 2023.

The Cheetahs are in Pool B alongside Hong Kong, Tonga and Jamaica, while hosts Chile have been paired with South Korea, Papua New Guinea and Georgia in Pool A.

The competition format replicates the Olympic Games, which sees the 12 teams drawn into three pools of four teams each.

The top two from each pool along with the two best third-placed teams will qualify for the quarter-finals, before the semi-finals and final will decide the winners who gain the ultimate prize of promotion to the HSBC World Rugby Sevens Series.

Danny Nhaka: Pride Nyameni was named the Player of the Tournament after the inaugural Zambezi Sevens Challenge at Harare Sports Club in April.