Zim to securitise its ivory stockpile 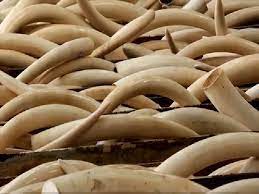 The discussions follow the announcement by the Reserve Bank of Zimbabwe (RBZ) that it will soon avail 22 carat gold coins, weighing 33,93 grammes, to be sold to the market starting July 25.

TATIRA ZWINOIRA THE Zimbabwe government is currently engaged in discussions on how the country can use its 130-tonne ivory stockpile as a tradable commodity or security asset, the Zimbabwe Independent can report.

The discussions follow the announcement by the Reserve Bank of Zimbabwe (RBZ) that it will soon avail 22 carat gold coins, weighing 33,93 grammes, to be sold to the market starting July 25.

The coins are meant to wipe out excess liquidity of nearly ZW$1 trillion (US$2,48 billion) money supply that the RBZ recorded in the market at the end of May.

The Ministry of Environment, Climate, Tourism, and Hospitality Industry has since set up a team expected to engage the Treasury and RBZ on how to make use of the multi-million dollar ivory stockpile.

“I have a team of experts looking into it. We think it can work. We know it can work but the challenge is that there are so many restrictions on ivory trade,” Environment, Climate, Tourism, and Hospitality Industry minister Nqobizitha Mangaliso Ndhlovu said in an interview.

“Our team is working closely with (the Ministry of) Finance to see how we can come up with an instrument that can unlock some bit of value but it’s early days. We want to monitor the uptake of the gold coins.

“I will be getting feedback from the team in a few weeks’ time in terms of what their recommendations are, and then we analyse to see what we can adopt,” he added.

The Wildlife Justice Commission (WJC), a Dutch-based organisation, estimates that Zimbabwe’s ivory stockpile is worth US$12 million.

The value of Zimbabwe’s ivory is based on a 2020 report by the WJC titled Rapid Assessment of the Illegal Ivory Trade in 2020.

In the report, the price of ivory per kg in Asia is anywhere between US$597 and US$689, while it costs about US$92 in Africa.

Vietnam, China and Japan are some of the top markets for ivory.

“It’s a number of areas that we are trying to unlock value including carbon credits. We are also exploring ‘ivory credit’ that can be traded more like carbon credit,” Ndhlovu said.

“I think the team will come up with the best options that we can discuss with the RBZ or Ministry of Finance.”

A March report titled What Are Carbon Credits, and How Can They Slow Climate Change, done by the United States-based social enterprise, TerraPass, said carbon credit is created when one metric tonne of carbon dioxide is removed from, or prevented from entering the atmosphere through an emission reduction programme.

Thus, the Environment ministry is looking at how the concept of carbon credits can be actualised for ivory.

“Ivory is a bit tricky given that Cites (Convention on International Trade in Endangered Species of Wild Fauna and Flora) has not granted permission to trade in ivory, it is still not permissible,” economist Godfrey Kanyenze said, adding that even if it was done locally, ivory trading would be problematic as this could fuel illicit activities.

The reason why the Zimbabwean government seeks to make use of its ivory stockpile is to raise money for conservation efforts as the country now battles an elephant population of 100 000, against a capacity of 45 000, according to the Environment ministry.

In May, an African Elephant Summit was held at the Hwange National Park, where Botswana, Namibia, Tanzania, Zambia and Zimbabwe endorsed a declaration to find ways of using their wildlife against Cites.

Cites was enforced on July 1, 1975, to protect endangered wildlife animals and later banned ivory trading in 1989.

The last time Cites was successfully pressured to allow the sale of ivory was in 1999 and 2008 by Southern African and Asian countries.