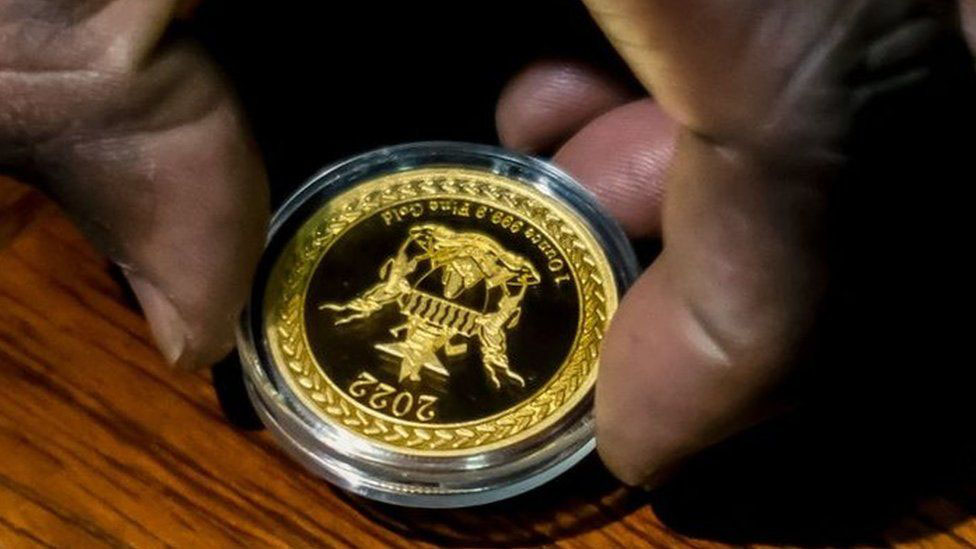 Since the release of the gold coins, parallel market forex dealers are trading the United States dollar for ZW$800 and between ZW$600 to ZW$700 for those selling their greenback, a sharp appreciation of the local currency.

TATIRA ZWINOIRA THE recent stabilisation of the Zimbabwean dollar is due to a number of Treasury and the Reserve Bank of Zimbabwe (RBZ) control measures, which mopped up local currency on the local market, the Zimbabwe Independent has established.

This is against a general belief that the introduction of the RBZ’s gold coins triggered the recent stability of the local currency.

A day before the release of the gold coins into the market, on July 25 2022,  parallel market foreign currency dealers were trading the United States dollar for ZW$850 and offered ZW$800 to people selling their greenback.

Since the release of the gold coins, parallel market forex dealers are trading the United States dollar for ZW$800 and between ZW$600 to ZW$700 for those selling their greenback, a sharp appreciation of the local currency.

The Independent is, however, informed that a number of local banks have since stopped issuing local currency loans with focus now on foreign currency lending.

“As you may be aware, interest rates moved from around 80% to 200% on local currency. Companies are still digesting and adjusting to those massive increases and some are cautious in continuing borrowing at those rates,” Confederation of Zimbabwe Industries (CZI) president Kurai Matsheza said in an interview.

“A few are still depending on their working capital funding models. Some banks, on the other side, may not have these facilities available because of other issues, like liquidity challenges and hence are not able to extend Zimbabwean dollar facilities.

“It’s a number of factors that have gotten us here. Slowing demand is also a factor,”

The Consumer Council of Zimbabwe (CCZ) added that consumers have slowed down on loans owing to high interest rates.

“Consumers are now affected, who really wanted loans in order for them to maybe further education or to exchange houses and so forth. It is now very difficult for them given the punitive interest rates,” CCZ spokesperson Chris Kamba said.

“I think that is the issue that we feel the authorities can look into because they just gave a blanket regulation for everybody regardless.”

In the Mid-Term Monetary Policy Statement (MPS) released last week, RBZ governor John Mangudya also alluded to the high interest rates as the reason behind a slowdown on the parallel market rates.

There has also been a liquidity shortage on the market following the introduction of a number of controls by the government, coupled by the clearance of the foreign currency auction backlog.

The central bank cleared the backlog of all allotted amounts in respect of auctions FX94 to FX102.

It is in the process of settling the ring-fenced backlog from main auctions amounting to US$169 million.

“The forex auction itself has mopped up liquidity because we have a backlog of bids that have not yet been financed,” Zimbabwe National Chamber of Commerce (ZNCC) president Mike Kamungeremu said in an interview.

This clearance of the auction backlog has triggered a recent shrinking of Zimbabwean dollar balances.

“If liquidity is tight, definitely banks will restrict lending because liquidity will be tight but it’s not like they (banks) are not lending in local currency,” Bankers Association of Zimbabwe (Baz) chief executive officer Fanuel Mutogo said.

As at August 10 2022, 4 475 gold coins had been sold realising ZW$3,7 billion of which 90% was paid in local currency while the balance was in foreign currency.

That means the gold coins mopped up less than 0,5% of the total liquidity of over ZW$1,11 trillion (US$3 billion) as at the end of June.

Government printing through Treasury Bills and RBZ bonds quickened the rate at which the Zimbabwean dollar was depreciating.

With the supplementary budget of ZW$929 billion (US$1,88 billion), double the 2022 national budget, and limited external financing, pressure to fund this with more debt securities will remain, resulting in further money supply increases.

Mangudya announced in the MPS that the central bank will introduce smaller and more affordable gold coins in the market to ensure wider access to the unit by the country’s citizens.

He revealed that smaller denominations of gold coins, which were put in place to mop up excess liquidity in the market, as well as act a store of value, will be introduced into the market in November this year.

The weight of each Mosi-Oa-Tunya currently being traded is one troy ounce, with a purity of 22 carats.

The coins have liquid asset status, which means they are easily converted to cash. They can also be tradable both locally and in international markets.

In addition, the coins have prescribed asset status, and offer institutional investors an opportunity to meet regulatory requirements for prescribed asset investments. Buyers of these coins can use them as security for loans and credit facilities.