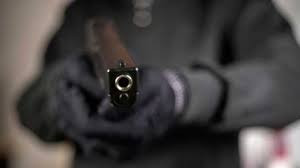 A MEMBER of the Zimbabwe National Army (ZNA) considers himself lucky to be alive after cheeky vehicle smugglers pumped eight rounds of ammunition into his body after being cornered at an undesignated crossing point along the Limpopo River in Beitbridge last week.

The soldier was part of a security team deployed to curb cross-border crime in the border town.

“He was on deployment and no one else was injured. As the norm, you can get detailed facts from the army through their national spokesperson,” said Nyongo.

Army spokesperson Alphios Makotore said he would issue a statement next week. Sources at Beitbridge District Hospital said the soldier sustained several bullet wounds and was  immediately transferred to Gwanda en-route to Bulawayo.

Currently, one of the super SUV’s is stuck along the riverbed after futile attempts to drive it across into Zimbabwe.

The daring car smugglers use several methods including hiring donkeys from villagers in the vicinity to tow their cars across the river.

The latest incident came as crime has been on the rise in the country with armed robbers exchanging gunfire with State security agents.