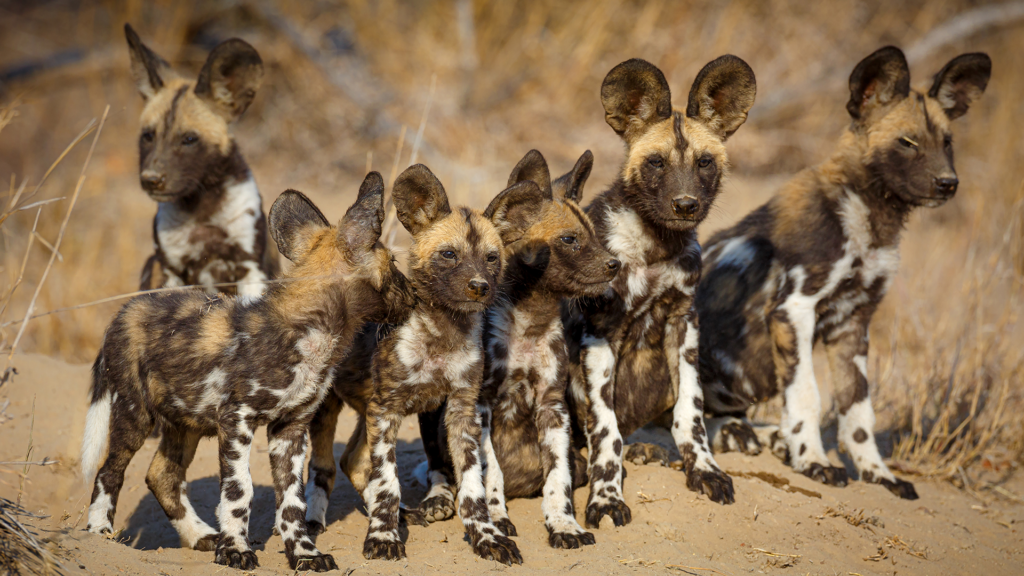 BY OBERT SIAMILANDU THE African wild dog has become one of the most critically endangered species in Africa.

With massively reduced numbers from the encroachment of farming activities, there is lack of genetic variation and a new strand of canine distemper threatens the species further.

“We need your pledge to raise awareness about the threats to these colourful carnivores now,” the foundation said in a statement.

“There are only about 6 600 remaining in the wild, but AWF is working to increase their numbers by expanding undisturbed wilderness areas where dogs can roam, collaborating with farmers to protect livestock, and more.

“African wild dogs are efficient hunters, with a hunt success rate of almost 80%. This makes them the third most productive hunter in the wild.”

The African wild dogs are said to be one of the top three most efficient hunting animals in Africa and are found in most parts of the continent aside from the drier deserts in the north, and the denser forests of the southern tip.

As some of the most social and vocal animals roaming the earth today, the African wild dog was an essential species to maintaining biodiversity in the African plains.

The African wild dog has been listed as an endangered species since 1990, and the species may soon be listed as critically endangered.

Their shrinking range is now located in the southern half of the continent.

In Zimbabwe, poachers are endangering the wild dogs in the Hwange National Park.

With limited employment opportunities and sporadic rainfall that negatively impacts farming yields, bush meat hunting has gained popularity over the past several years as a means to make a living.

As a result, poachers use wire snares, which kill animals indiscriminately. Wild dogs are particularly vulnerable to injury or death by snares because they cover a lot of ground while hunting and travel more than 12 miles per day on average.

They are normally targeting elephants for their ivory but kill a variety of other species in the process, including the African wild dog.

The range of the African wild dog, as described by the International Union for Conservation of Nature, is shrinking daily as humans attain more land and are pushing the animals into smaller, less desirable territories.

Their large round ears aid in body heat release and differentiate them from their wolf ancestors.