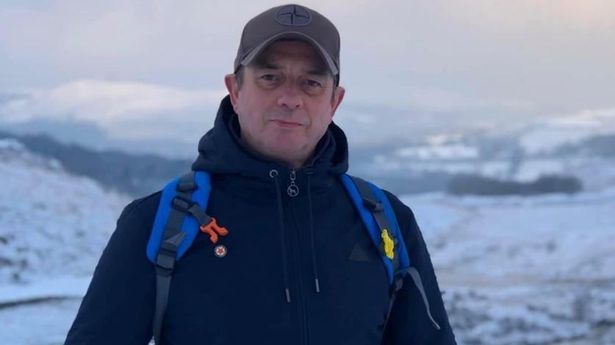 Mulligan, 61, was born in Manchester in 1961 but he has firm memories of growing up in Llandudno, Wales, in 1903, as North Wales Live reports.

The other life Steve Mulligan has claimed he can remember a past life of his thanks to a hypnosis session, which triggered ‘vivid’ memories of how his former self died during WWI

Mulligan, 61, was born in Manchester in 1961 but he has firm memories of growing up in Llandudno, Wales, in 1903, as North Wales Live reports.

He said he could remember growing up as Sydney Sutcliffe, who was reportedly killed at the age of 24 during the First World War — and Steve said he had memories of Sydney being shot down over the Western Front.

Alongside visions of the war, Steve claims he has “vivid” memories of growing up in Llandudno more than a century ago, and now he’s returned to the area to visit Sydney’s grave.

Steve said: “Since my childhood I’ve always been drawn to Llandudno, even when I came here as a child I knew my way around and my mum used to be amazed at how I knew where to go. When we’d be walking around it was like I was having Déjà vu — like I’d been there before. It wasn’t until someone suggested doing a past life regression that all of this came spilling out.”

Steve said he went for a hypnosis session with Paul Goddard and recalled joining the Fusiliers in Wrexham and later joining the Royal Flying Corps before serving as an aerial photographer and gunner during WWI.

“When I did the hypnosis session with Paul I’d never done anything like it before but I had all these memories that I could see in black and white. I remember being in the aircraft and looking down on the ground below and thinking I was glad I wasn’t down there. I can remember thinking, I’m like a bird.”

He claims his last memories are of an aerial reconnaissance flight over enemy lines near Cambrai, France.

Steve says he can remember looking out of the aircraft to the ground below moments before it was hit by enemy fire, causing the plane to spiral out of control.

He explained: “I can remember that feeling as the aircraft was going down and it was really strange because I had no control of it. I could feel that loss of life but there’s nothing I could do.”

He later visited the war memorial in Llandudno with his partner Sharon, where he found the name ‘Sydney Sutcliffe’ listed among the local soldiers who sadly died during World War One.

Alongside visions of the war, Steve says he has “vivid” memories of growing up in Llandudno more than 100 years ago.

He said: “I didn’t know anything about Llandudno apart from coming here as a child until I did the regression. I had never heard the name Sydney Sutcliffe, so for me to choose that name out of millions of names and for that to be someone who did live in Llandudno, it’s just incredible.”

Steve also says he remembers performing on stage at Llandudno’s Pavilion Theatre with his father, who he believes was an entertainer.

He said: “I can remember my father was an entertainer and I can see him doing his act on stage and making the crowd laugh. I remember I would help him on stage sometimes, kind of like a Stavros Flatley father-and-son routine.”