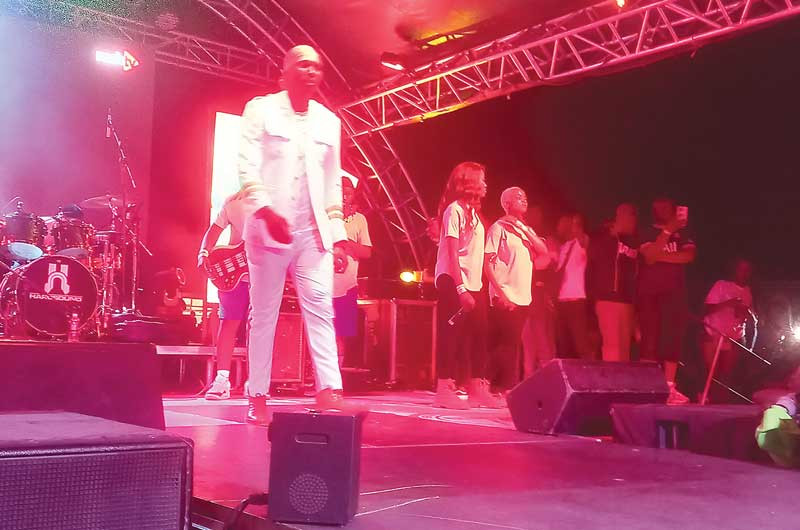 Freeman at his album launch

MERRYMAKERS were spoiled for choice on a weekend which had entertainment galore on the local showbiz scene.

The two events were the main crowd pullers on the showbiz scene.

Zimbabwe continues to be a country of choice for many international acts as Jamaican dancehall singer Chris Martin graced Freeman’s album launch on Saturday at Alex Sports Club in Harare.

Chris Martin is featured on the track Zimbabwean Queen.

The Cheaters Prayer hitmaker returned to Zimbabwe as a guest artiste about four years after his maiden performance in the country.

Both Stanbic Jacaranda Music Festival and Freeman’s album launch had great line-ups of performers who commanded a huge following in their solo careers.

This year, the Stanbic Jacaranda Music Festival, whose curtain came down yesterday night, made its optimum return after a restricted attendance last year, owing to the COVID-19 pandemic.

The festival, which witnessed more than 30 performers both local and international take to the stage, kicked off on Wednesday with a two-day music conference held at The Venue in Avondale, Harare.

As promised, all artistes who were on the line-up for Freeman’s 12th album launch turned up for the show and delivered great performances.

From the huge turnout for the launch, it appears Freeman made the right choice alongside his partners to fly in the Jamaican star as a part of the event.

The highlight of the night was when the Dancehall Doctor, as Freeman is also known by his legion of fans, shared the stage with Chris Martin.

Freeman was well embraced at the launch, which did not turn out to be a Chris Martin show, who showed he was just here to support a brother in music.

Speaking to NewsDay Life & Style through his manager Michelle Mukaro ahead of the launch, Freeman said the production was not just an album, but a conversation for all.

“Through this album I pray that we challenge ourselves to do better in fighting the various ‘goliaths’ which we face. May it be a moment that allows communities, families and stakeholders to sit down and tackle the challenges being faced by young adults who are addicted (in many forms), depressed and on the verge of committing suicide,” he noted.

Away from the stage, the promoter of Freeman’s album launch Nash Paints and Hatipfeke Junk next time should, improve on their logistics.

Considering the time, this was just ridiculous and probably taking the media for granted to call for a Press conference that late.

However, after hours of deliberations, the Press conference was cancelled.

At the launch, there was alcohol shortage at the VIP section and other revellers were forced to go outside the barricade to buy and sadly, they were not allowed back into the venue.

Also, there was a single mobile toilet for ladies and a single one for gents, which ended up not working properly, making it difficult for many to relieve themselves.