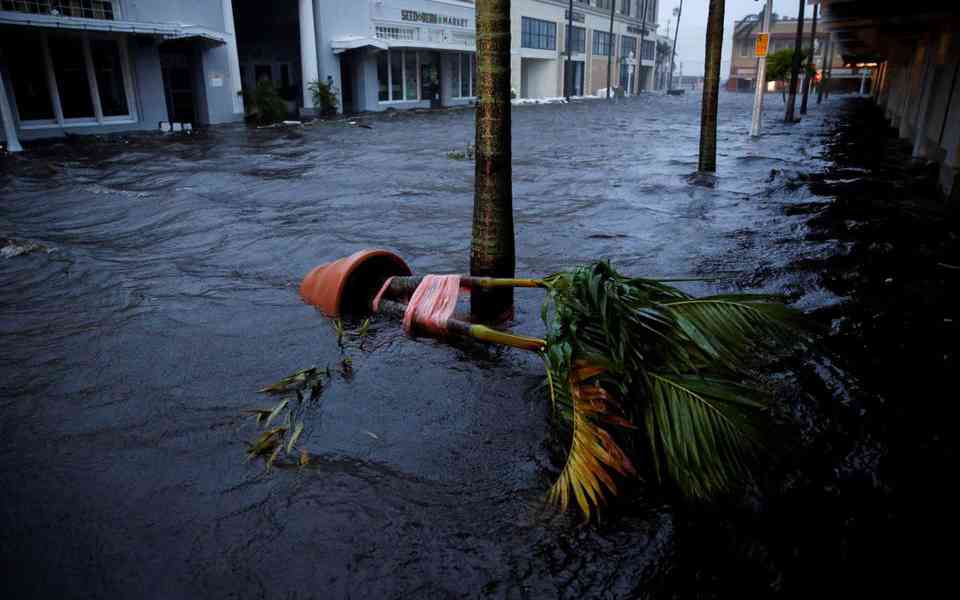 A flooded street in downtown in Florida,US

VENICE, Fla., Sept 29 (Reuters) - Rescue workers and residents of Florida's Gulf Coast searched for missing people and picked up the pieces from wrecked homes on Thursday after Hurricane Ian tore through the area with howling winds, torrential rains and raging surf.

One of the mightiest storms to hit the U.S. mainland in recent years, Ian flooded communities and left more than two million homes and businesses without power before barreling on across the peninsula to the Atlantic seaboard.

It was downgraded to a tropical storm on Thursday morning as it weakened over land.

Ian blasted ashore at the barrier island of Cayo Costa on Wednesday afternoon as a Category 4 hurricane with maximum sustained winds of 150 miles per hour (241 kph).

An unspecified number of people were stranded after choosing to ride it out at home rather than heed evacuation orders, Florida Governor Ron DeSantis said.

In the early morning hours after it passed, residents in hard-hit areas hunted for family and friends as trees, debris and power lines covered roads and standing water washed over the ground. The search was made more difficult as cell phone services were often cut.

"A lot of down trees, a lot of flooding everywhere. We are trying to get a hold of my daughter," said Terri Byrd as she sat in a vehicle in a Walmart parking lot trying to get cell service after spending the night at an elementary school in Venice.

Ian slackened as it trekked across Florida but was still producing strong winds, heavy rains and storm surge, including in Georgia and the Carolinas, the U.S. National Hurricane Center said.

The storm, packing maximum sustained winds of 65 mph (100 kph), was about 40 miles (70 km) southeast of Orlando, the Miami-based forecaster said.

President Joe Biden approved a disaster declaration on Thursday, making federal resources available to the counties impacted by the storm.

As Ian made landfall from the Gulf of Mexico, roiling seawaters swept into waterfront homes in Naples, Fort Myers and other towns and cities. Firefighters waded through chest-high waters to rescue people, including one woman in Naples who was stranded in her car.

St. Petersburg Mayor Ken Welch said Pinellas County had been spared while neighboring counties took the brunt of the storm. Local officials would make their first push at dawn to assess damage and start addressing the roughly 190,000 power outages there, he said.

"This storm showed us...that these storms are very powerful but also the track was very accurate," he told MSNBC.

In Venice and elsewhere, downed trees and power lines littered roadways, roofs were ripped off homes, and water poured into neighborhoods. Boats at their moorings were tossed around like corks.

There were no official reports of storm-related fatalities or serious injuries in Florida. But U.S. border authorities said 20 Cuban migrants were missing after their boat sank off the coast on Wednesday.

Local power companies said more than 2.4 million homes and businesses in Florida were without power early on Thursday after being hit by the storm.

Some utilities had started to restore customers now that the storm has passed southern Florida but the number of outages increased as the storm moved across Florida.

Crews will head out when they can safely assess the extent of the damage and where power can be restored, but if infrastructure needs to be rebuilt it could take weeks, Reuter said.

Ian was expected to reach the Atlantic Coast on Thursday afternoon, the NHC said.

It continued to unleash drenching rains as it crept farther inland, threatening to bring more extensive flooding. Up to 30 inches (76 cm) of rain was forecast to fall on parts of central Florida, the NHC said.

SHELTER FROM THE STORM

Florida's southwestern shoreline, dotted with sandy beaches, coastal towns and mobile home parks, was rapidly transformed into a disaster zone as the storm hit. Small residential areas off of Highway 41 were left in a shambles.

A lot in front of a grocery store in Venice became a lake, with waters reaching the trunks of some the cars parked there. Communications were nearly impossible in many spots.

Video images of the storm's fury on local TV and social media showed floodwater nearly reaching rooftops in some communities, sweeping away cars and the ruins of homes as palm trees were bent almost in half.

Many mobile home residents took refuge in local schools and other facilities converted to emergency shelters. The area's numerous assisted-living facilities were mostly evacuated, too.

DeSantis said Ian had generated life-threatening storm surges - waves of wind-driven seawater rushing in along the coast - of up to 12 feet (3.7 meters) in some places.

"This is a storm that we will talk about for many years to come, an historic event," said Ken Graham, director of the National Weather Service.