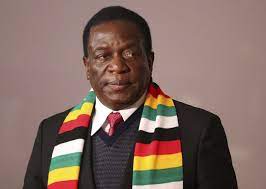 Zimbabwe has been thrown into turmoil by reckless Chinese miners. They are untouchable because they enjoy the protection of government officials. Amid widespread outcries over their destructive tendencies, the Chinese have been on the warpath digging up riverbeds and blasting away mountains to extract minerals.

LAST week’s threat by President Emmerson Mnangagwa to punish miners who have decimated swathes of mineral and agricultural fields demonstrated that he has suddenly awakened from his slumber and realised that the country was being ripped apart while he looked away.

Zimbabwe has been thrown into turmoil by reckless Chinese miners. They are untouchable because they enjoy the protection of government officials. Amid widespread outcries over their destructive tendencies, the Chinese have been on the warpath digging up riverbeds and blasting away mountains to extract minerals.

Along their paths, they have threatened and pushed away defenceless villagers from their ancestral lands to gain access to lucrative goldfields. Sacred graves and delicate ecosystems have been caught up in the mayhem. The government quakes when discontentment over villagers’ plight envelopes communities. Government’s quietness is shocking and it is easy to tell on whose side authorities stand — they are determined to protect their friends.

The madness that has gripped this country — abandoned pits, tonnes of disused mining equipment lying everywhere, contaminated rivers and an abused workforce — demonstrate what happens when authorities dance to the whims of plunderers for political or diplomatic gain. Before the current gold and chrome rush, operations like platinum miners Mimosa Mining Company, Zimplats and Unki along with gold producers like Caledonia, had set up mines in Zimbabwe.

Poor villagers have seen their lives transformed. This may not be enough compared to the value of wealth that these firms extract out of the country. But there has been some form of reasoning taking place compared to the tragedy that Chinese investors have triggered in remote outback locations. One only needs to visit the foothills on Boterekwa Mountains to see how a village constructed by Unki for displaced villagers has changed lives.

Zimplats has constructed a new mining town out of swathes of forest in Ngezi, and Mimosa’s interventions have resurrected life in Zvishavane, the lifeblood of its surrounding districts. In contrast, politically-connected Chinese investors have completely veered off the path of reason and taken a destructive path at the behest of their friends in government.

In the Democratic Republic of Congo, a bold and decisive government deported 45 such malcontents last year in order to save the country. But Zimbabwe is a curious case.

New gold and chrome fields have been turned into the proverbial resource curse, as Chinese, together with cronies of the regime’s officials, parcel out the most pricey assets to amass fortunes.

It has been clear that international airports have been turned into hubs for spiriting away ivory, foreign currency and minerals.

The rate at which things have fallen apart in mining fields is worrying. But there is little hope that the government has the stamina to bring order. If the President wanted to act, such action should have been taken many years ago. He was Vice-President for many years when the destruction began. Surely, he should be the last person to cry foul.He is just shedding crocodile tears.