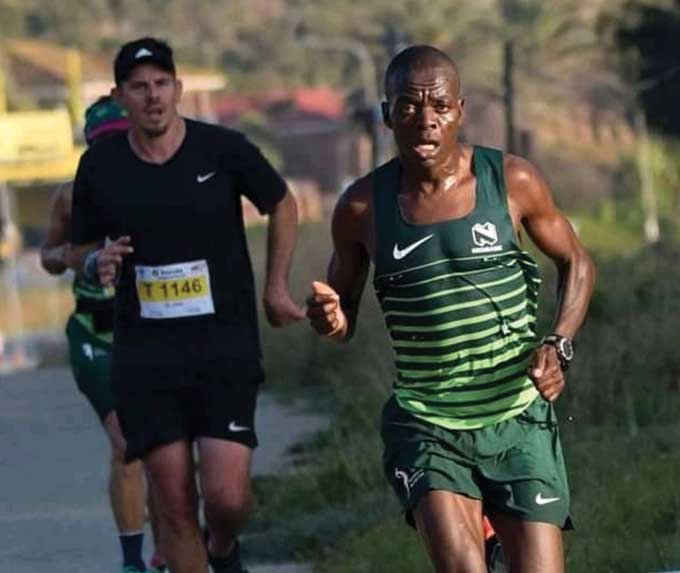 Recently, Mpofu made headlines after he shattered a seven-year record of 2 hours 9 minutes 52 seconds set by Curthbert Nyasango in 2014 when he took part in the men’s marathon in Eugene, Oregon, United States when he crossed the finishing line on position 10 in 2 hours 7 minutes and 57 seconds.

BY MAGRETH RUZVIDZO GROWING up in Matabeleland region, Zimbabwe long distance runner Isaac Mpofu didn’t think that one day he would be able to tour the country let alone manage to compete at a global meet.

Recently, Mpofu made headlines after he shattered a seven-year record of 2 hours 9 minutes 52 seconds set by Curthbert Nyasango in 2014 when he took part in the men’s marathon in Eugene, Oregon, United States when he crossed the finishing line on position 10 in 2 hours 7 minutes and 57 seconds.

Though his dream for the global meet once hung in the balance after his disqualification at the Durban International Marathon in May, Mpofu’s 2 hours 10 minutes 24 seconds qualifying times was later reinstated after the National Athletics Association of Zimbabwe (NAAZ) appealed to Athletics South Africa (ASA).

Mpofu was disqualified for failing to wear a second bib at the back, which displayed a second license number and his R50 000 prize was forfeited.

Born in Hwange, the 33 year old Mpofu started with a number of sport codes before his long distance travelling to school inspired him to venture into athletics.

More so, his father was a footballer which prompted Mpofu to fall in love with sport.

His upbringing was a tough one as he hopped from one school to another until he completed his secondary education but looking at his recent performance, Mpofu now believes he is destined for great things.

“I have participated in many races that I have lost count of, managing to win some. So surely I am enjoying my career, especially this year, it’s a brilliant one. I’m writing my own history through sports, impressive achievements indeed,” said Mpofu.

“I was a multi competitor, I did different sports disciplines. I once played soccer, volleyball and did athletics. But with much motivation, I managed to go on with athletics which I did from school until now. I think long distance travelling to school when I was at home inspired me to be a long distance runner.

“I loved sports since I was a kid. I saw my father’s photos every time, he was a football player back then. So I was so inspired to be like him.

“Due to his search for better jobs, my father managed to move from Kamativi to Matebeleland South in Gwanda, Blanket Mine where he worked. So, I had to move with him, that’s where I also did part of my primary and secondary school level too. Things weren’t that good in the family, so I had to move from one school to the other. Then it became worse when both parents were no more. My schooling wasn’t that smooth as I faced a lot of challenges.”

Mpofu, who is a police officer stationed at Fairbridge Support Unit in Bulawayo, recalled one of the first big events he took part in where he later realised that being an athlete comes with a prize.

“My motivation came when I realised I can get something from running. That happened when I participated in the Kujatana Kubotu race in Binga in 2008 and 2009. I got my prizes there and surely they changed my life and I started to be serious about running,” he said.

Looking at his support base, Mpofu believes their unwavering support has made him sail through.

“My family and relatives have been the key to my success.

“They have supported me in everything I do. Also my commanders at work, all have contributed a lot for me to be where I’m today,” he said.

As most sport codes call for sponsorship, Mpofu also said this is one area lacking in sport and hindering most athletes to excel in their careers.

“It’s been a rough path indeed; even now I still face difficulties in many areas. Every athlete needs sponsorship in order to excel. So without it, we usually struggle a lot.

“I don’t have much achievements, but I can say I’m a two time World Championships qualifier and attender. I also won some other races locally and internationally.

“I think what I’m doing now is opening bigger doors for me. I wish to compete in major races in Europe, so I will train hard to fulfil that dream. Qualifying for the 2024 Olympics in Paris is also my target,” Mpofu said.