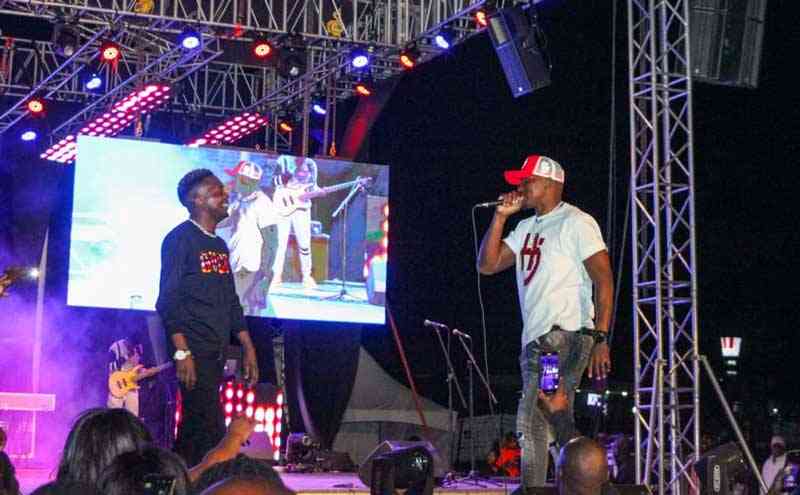 THE purple colour symbolises royalty, but the opposite was true as Jah Prayzah’s set at the Purple Festival at Belgravia Sports Club in Harare at the weekend was marred by chaotic scenes.

The festival was part of Booties, a local pharmacy’s 12th anniversary celebrations.

Empty beer bottles flew from all directions to the stage when the Kutonga Kwaro hitmaker had only performed two songs of his set.

Jah Prayzah and his band were forced to seek cover after the crowd was enraged by the security details who unleashed dogs on revellers, while trying to maintain order.

The overzealous security was trying to stop people from breaking the bar that separated the stage from the crowd.

Jah Prayzah only returned to the stage when things had settled. As he took to the stage again, for a moment trauma was written all over the singer’s face.

As he got back to the stage, the crowd went crazy for him as evidenced by the pushing and shoving as many wanted to be closer to the stage to be able to have a good glance of the multi-award winning singer.

Despite the skirmishes, Jah Prayzah went on to put up a pure performance as the closing act where fellow artistes across genres had already electrified the mood.

No doubt all the artistes gave fans value for their money.

The fun-packed festival kicked off in the morning with a Zumba session that was followed by the food and business show in the afternoon.

Scheduled to start at 6pm however, the show kicked off about two hours late such that between 6pm to 8pm it appeared as if the event was a flop as there were only a handful of merrymakers.

Songbird Feli Nandi was the opening act and she did not disappoint although she performed for a few revellers as some were still trickling in.

She left the stage for MC Talliban, DJ King Her and radio personality-cum-club-DJ Abisha Palmer born Abisha Tendai Zenda, who got the crowd dancing to reggae, dancehall and the trending amapiano sounds.

Mbare-bred Killer T was the next to take over the microphone as he went on to put up a top-class performance that left many satisfied.

Hip-hop sensation, Takura proved to be a favourite with ladies as evidenced by the wild screams from the females as he got to the stage and during his performance.

The Goosebumps hitmaker did not dampen the electrifying mood that had been created by Killer T as he connected and interacted well with the audience during his lively set that included the song Negative Energy which he said was a true story of his life.

Having such a good night on the stage, the hyper-active audience pleaded for Takura’s return despite the lapse of his slot time.

Also, with an outstanding entrance was Nutty O, who has just been nominated for the All-Africa Music Awards.

He proved he has what it takes to be a full package, thus being a studio and live performer as well. His performance was just a marvel to watch.

To follow was Enzo Ishall who however, started off his performance on a not so exciting level, but after sensing the excitement the audience had for him, he reacted so fast and upped his game belting most of his hit tracks which included Kanjiva.

He also connected well with the audience and some joined him on the stage. Interestingly, others were seen removing their shoes and handing them over to him when he was performing one of his hit songs Smart Rinotangira Kutsoka.

Booties Pharmacy brand manager Valentine Zhou admitted that they faced a lot of challenges in coming up with such a festival, adding that they still had a lot to lean.

“We faced a lot of challenges as this was our first event, so we had a lot of things that needed to be learnt in terms of what to do and how to do it. We had financial problems as well as difficulties in getting manpower in terms of who to trust,” Zhou noted.

“We had over 100 exhibitors who came through and special thanks to our sponsors and Daisy Chabvundura for being our versatile leader as she led from the front to put this all together.”